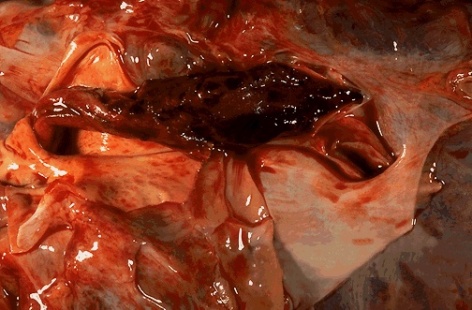 A bit of plosive alliteration for you today! I thought I’d write about a problem that often presents to the ED and there can be some confusion on how to manage these patients: suspected PE’s in Pregnancy. In the UK, there have been guidelines published from the Royal College of Obstetrics and Gyanecology (RCOG) which are worth a read (especially if you are about to take the FRCEM!). However they were written in 2007 and there have been other treatment options available for massive PEs. (More about that later).

Imagine you are the ED registrar on in a rural ED. A 30F who is 34/40 presents with shortness of breath and pleuritic chest pain. She is tachycardic at 110 bpm and has sats of 96% on room air. Her BP is 110/80. After examining her you are concerned she may have a PE. After explaining this and she will need a CTPA to her, she asks “isn’t the radiation dose bad for my baby?”….. What do you say? Are there any figures to give her? Are there any other imaging modalities to consider? If it is a PE what are her treatment options?

I know that PE is a large topic and there are some good blogs/podcasts out there. This post is just about PE’s in pregnancy. A quick note on DVT’s in pregnancy: start anticoagulation and get a compression duplex USS. If it is negative but the clinical suspicion is still high, keep the patient on anticoagulation and repeat the scan in 1 week or arrange an alternative imaging method. If a patient has back pain and her entire leg is swollen, think Iliac Vein Thrombosis. She will likely need an magnetic resonance venogram 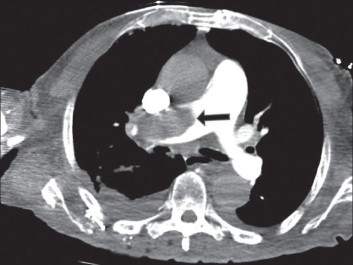 What investigations are needed for your pregnant patient?

Get a CXR! It can identify other lung pathology such as a pneumothorax or pneumonia. The radiation dose to the fetus is negligible. It can be normal in >50% of women. If it is abnormal and the clinical suspicion is high, arrange a CTPA. Now if the CXR is normal, the RCOG suggest performing bilateral USS lower limbs.

“A diagnosis of DVT may indirectly confirm a PE, and as the anticoagulation treatment is the same for both, further investigations may not be needed.This would limit the radiation dose to mother and fetus.”

If both tests are negative and you’re still worried about a PE, get a CTPA or V/Q scan. If either of these are normal but you are still concerned about a PE, repeat or use the alternative method until PE has been definitively excluded.

You should tell the patient about the risks of each investigation so they can give an informed decision about which one they prefer. The likelihood of remembering these figures is low, but you now know where to get them from. Just remember that V/Q scan has a higher incidence of child hood cancer and CTPA has a higher risk of breast cancer.

What about the D-Dimer?

Here is what I think of it: 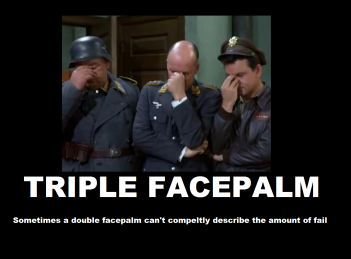 Just don’t do it. If it has been done and it is negative…. it doesn’t matter. Yes the chance of the patient having a PE is low but if you think your patient has a DVT/PE you are still going to investigate them for it.

What treatment are you going to prescribe?

LMWH, in 2 doses subcutaneously according to the patient’s booking in or most recent weight. There should be some local guidelines of dosages available.

Oral anticoagulants cross the placenta and shouldn’t be used. I assume this holds true for the newer Novel Oral AntiCoagulants (NOAC) but I do not know for sure and I couldn’t find anything about them on the RCOG guidelines or the British Society of Haematology.

Your patient starts to become extremely SOB and dumps their BP to 80/. What are you going to do? They’ve had a CXR which looked normal but nothing further.

The patient has probably got a massive PE. There are several treatment options available, some more available than others depending on where you work. The RCOG suggest calling the consultant obstetrician, I would also be chatting to a respiratory consultant and getting a cardiologist to come and do an echo to look for a dilated RV (evidence of right heart strain). 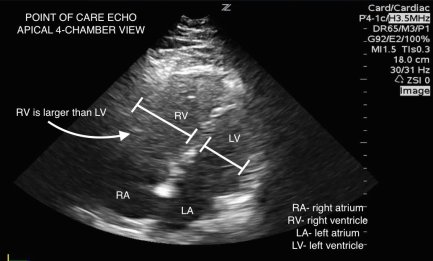 If your patient is about have a cardiac arrest prior to getting confirmation of a PE, give iv heparin (80u/kg followed by infusion 18u/kg/hr) or tPA. (Eg Alteplase: 10mg in  1-2mins, 90mg over 2hours). If they have a massive PE and are not in cardiac arrest, there is life beyond heparin…..

This is a diagram taken from a chap called Oren Friedman, a pulmonary critical care doctor woking in Cornell PE Advanced Care team. This made sense to me and helped clarify which patients would benefit from which treatment. 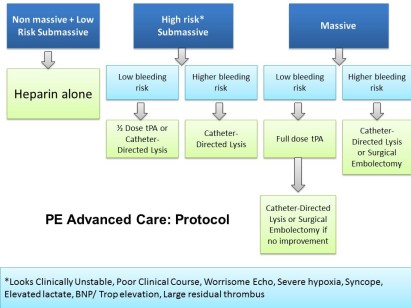 I appreciate that there aren’t many hospitals that can offer all these treatments, but I have no doubt they will become more widely available as time goes on. Some day you may be that consultant making the decision of which treatment to give your patient and you may just be thankful you “sweated the small stuff” and knew a bit about the various options……

The patient in the scenario received some iv heparin in resus and made a full recovery……..

I hope this post has taught you something new or even just reminded you about the guidelines.

One thought on “Pregnant People Presenting to Physicians with Pulmonary Problems”

A new Emergency Medicine Consultant. Trying to provide pearls of wisdom given to me by people far more intelligent than i am!
%d bloggers like this: