Close scrutiny will show that most ”crisis situations” are opportunities to either advance, or stay where you are. (Maxwell Maltz)

Perhaps the worst sentence in medicine:

“Do you remember that patient you saw yesterday?…..”

We all make mistakes, even the most eminent surgeons do, like Sanjay Gupta.

Todays post took a while to publish. A dear friend of mine allowed me to tell his story about what it was like to be investigated by the GMC (General Medical Council) in the UK. His case has been closed and he wanted to talk about what he had gone through during the year it took to resolve the complaint. I’m not going to talk about the case specifically. After reading this, if you are, have been or know someone who has been in this situation, I hope this post will help.

My friend (Dr X) was a final year EM SpR. He had just passed his FCEM exam (in the UK) and was about to attain his CCT (Certificate of completion of training). “Things were going so well, I had just finished my exams and was looking forward to having some time off…”

On a busy ED night shift he was asked to review a patient by an F2. I won’t mention any further details.

“I made a mistake. When I heard what had happened, I felt so sorry for the patient, it was gut wrenching.”

It was investigated by the trust’s Serious Incident (SI) panel and the subsequent action points implemented. He had written a long reflective analysis about the case. For months he felt awful and the way he practiced medicine became defensive. After a year or so, things had got back to normal. After all the the incident and been closed. He had taken a year or so out of NHS life to pursue other interests. He had just applied for a ED consultant post and things were going well.

He remembered arriving back home one evening and finding an envelope. He was alone and opened the letter. It had a GMC letterhead:

Dear Dr X, Mr Y has made a complaint against you, which we need to investigate….Some cases are referred to a public hearing and can have serious consequences….

He instantly felt a sudden surge of heat overcome him and started sweating and wanted to cry. He felt nauseous and started to think “what if I’m struck off?…my career is over. How will I be able to work and look after my family? I started looking up all the  fitness to practice reports online. Looking to see what type of things those doctors had done. I kept thinking ‘is that what I’m like?’ ”

He told me “it may seem irrational talking about this now, but at the time it didn’t seem that irrational, it felt very rational! Then when I told my wife, who was so supportive, i suddenly became angry…”

He said it felt like a vendetta by this patient. That feeling persisted for weeks. He informed all the organisations he worked with about the case.

I felt inferior telling them all….

He contacted his defence organisation immediately. He wanted it to all go away. He wanted to admit he made a mistake and apologise in order to try and sort it out as soon as possible. “They were brilliant, the advisor and solicitor told me not to reply and to let them converse with the GMC. They said it would be a year or so for the case to be concluded”

He needed to gather evidence to show how he had changed practice as a result of the incident. He remembered pulling out all the emodules on reflective writing, documentation etc he had completed after the SI had happened. He printed off all the relevant articles he had read and all the multi source feedback reports from his training and asked senior colleagues for character references.

In the following weeks, a large box of all the medical notes arrived. Hundreds of pages of notes. He went through them, page by page, making notes. He then looked at the ED notes….. He told me he hadn’t made an entry.

“The F2 was writing the entry in the notes as I was examining the patient. That is what usually happens when I review someone. It happens when consultants do a ward round. The F1 will be writing in the notes. I didn’t think to check what had been written. I remember that moment. Its etched in my memory. The ED was so busy, 5hr waits and patients overflowing in majors and a full resus. Of course I had escalated this to the relevant people but that is not an excuse for my mistake.”

The documentation was poor.

No “safety net” had been documented, in the words of my first ED consultant “if you didn’t write it in the notes, then it didn’t happen…”

Over the year, he said that his mood was up and down. Whenever there was a letter from the GMC about the case, he felt sick and for a day or so after, he would refer patients that didn’t need referring as a defence mechanism.

The worst part came when he had applied for his substantive consultant interview. He felt ashamed at having to write something in the “any current investigations” box. The interview was stressful enough as it was without having this “elephant in the room” with him.  After the medical director representative at the hospital trust asked him some generic questions,  Dr X decided to talk about the case. Openly and honestly. He talked about what he had learnt and what changes he had made to his clinical practice.

People tell you ‘you haven’t seen enough patients, if you haven’t had a complaint against you’…..

Dr X, said that doesn’t make it any better. Having a support network to help you is so important. For him, it was his wife and immediate family. He also talked to some colleagues he respected, about the case. He used to read his character references sometimes. It made him feel better in those dark periods.

You need to get your head around the fact that this will take a long time to resolve. The GMC are backlogged with cases as more and more patients make complaints. I’m not saying this is wrong. Patient’s need to be protected from dangerous doctors, this post is not disputing that. This post is about what it is like from the doctor’s perspective.

These are some of Dr X’s learning points: 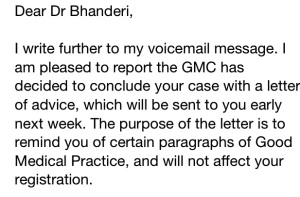 I hope this helps those who have been in a similar situation. I hope it also helps those (especially educational supervisors) who know of doctors or nurses in a similar situation, understand what it is like for them going through this.  I have changed my practice for the better and I think we sometimes need to be reminded about aspects of the GMC’s Good Medical Practice document. Unfortunately for me a patient had to suffer to highlight where I had failed to uphold certain aspects of that document.

2 thoughts on ““Doctors make mistakes…Can we talk about that?…””