I thought this week I’d talk about a particular injury which can be catastrophic if it is missed. I’m sure you will agree that as Emergency Physicians we should be competent to interpret tests that we order on a daily or regular basis. These include things like blood tests, ECG’s, ABG’s and X-rays (there are many more). However as access to CT’s have become greater in most ED’s, I also believe that we should be able to interpret the common CT’s we order. I’m not talking about becoming a radiologist, but we should be able to diagnose the obvious abnormalities and go beyond to look out for some of the less obvious signs (Remember I’m all about “sweating the small stuff”!). I know we get a report, but just occasionally the provisional reports may miss abnormalities that you have seen. This post is concentrated on one particular injury.

There are some great online sites on how to interpret CT’s, especially CT Heads: radiopaedia.org and radiologymasterclass.co.uk are particularly great. In fact combing the two was really useful and a great teaching tool for juniors. If you work in an Major Trauma Centre (MTC), CT may be the first port of call with regards to imaging a C-spine. If you work at a Trauma Unit (TU), you may order X-rays first then CT if necessary. From a personal point of view, interpreting C-spine XR’s can be tricky especially when you first start doing it (given the potential consequences of missing an abnormality), but CT’s I found were harder. I think this is because I simply hadn’t seen as many compared to XRs. I was taught how to interpret XR’s throughout my training but not CT’s. I wish I had made more of effort to learn as a trainee. Again there are some great sites on line and youtube videos.

Imagine you are the ED registrar at work in a TU. A 22 yrold male has been brought into you after jumping head first into the shallow end of a swimming pool. His friends, who witnessed the incident, immediately found him prone at the bottom of the pool and dragged him out. He is GCS 15, BP 130/80, P 110, Sats 99% (on O2). The ambulance crews have immobilised his C-Spine with a hard collar, blocks and tape. (Im not going to mention my own thoughts on triple immobilisation in this post!, lets just stick to ATLS for now). His primary survey is normal until “D” where he has reduced power 2/5 in both arms and 0/5 in both legs. It appears he has a sensory level at C6 and has priapism. A CT Head to Pelvis is performed with no evidence of injury except a C-spine abnormality. A recap of the anatomy of the lower cervical spine fractures (C3-C7): 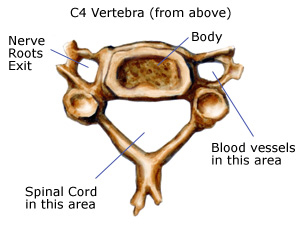 A quick note on spinal stability using the the Denis three column principle: 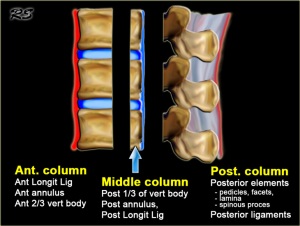 An unstable injury requires a disruption in 2 or more columns. In addition if there is a degree of vertebral compression:

Thoracic & Lumbar spine: >50% from an acute injury is generally considered to be unstable. 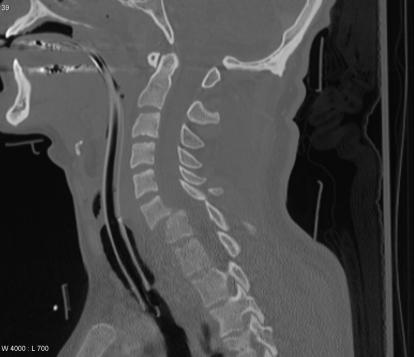 On the axial CT: Look for the Reverse Hamburger Bun Sign of the facet joints: (Case courtesy of Dr Noyan Zenger, Radiopaedia.org) 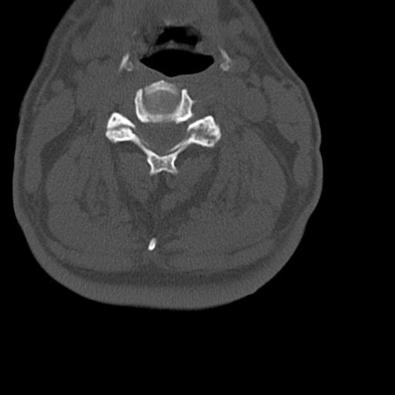 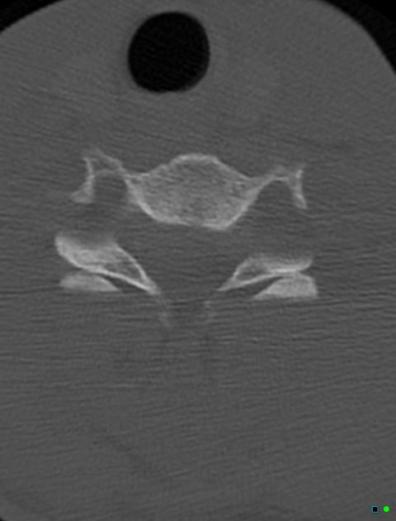 Facet (“Face it”…yes tenuous I know but I had to try…) Joint Dislocations: Typically from forced flexion/ hyper flexion and rotational mechanism.

Bilateral: All the ligaments are disrupted allowing both articular masses of the vertebra to dislocate. On the lateral view, the vertebral body will be displaced >50% of its width. These are unstable and have neurological deficits (para/quadraplegic) Have a look at this from radiopaedia.org on Perched facet joints as well.

As you get of the phone to neurosurgeons in the local MTC, who have accepted him to come over, his vital signs start to change: BP is 80/50, P: 66. He is warm and his peripheral veins are dilated. His not not passing any urine into his catheter. The final year medical student says to you: “He is in spinal shock right?”.

Is he? or is he in neurogenic shock? Whats the difference? Before we get into that,

REMEMBER THAT HYPOTENSION A MAJOR TRAUMA PATIENT WITH SPINAL CORD INJURY IS DUE TO HYPOVOLAEMIA UNTIL PROVEN OTHERWISE. INTRAPERITONEAL BLEEDING CAN PRODUCE A VAGAL REPSONSE PREVENTING THE PATIENT TO MOUNT A TACHYCARDIA!

Spinal Shock: Not a true form of shock. Think of it as “Concussion of the spinal cord” (see LIFTL’s traumatic spinal injury post). The patient will have flaccid arelexia occurring hours to days after the injury and can last days to weeks. The bulbocavernosus reflex is amongst the the first to return as the spinal shock resolves.

Your patient’s signs and symptoms are due to neurogenic shock. You have ruled out a hypovolaemia cause for the hypotension. How are you going to treat him?

In patients with an injury at C5 or above, think about early intubation. Remember “C3, 4, 5 keeps the diaphragm alive.” I would also strongly consider intubating patients who have an injury just below C5. This is because spinal cord oedema can extend to involve the roots of the phrenic nerve. Young patients can support their breathing with intercostal and abdominal muscles but will eventually tire.

Aim for organ perfusion: (normal mentation, Urine output 0.5mls/kg/hr, MAP >65mmHg). Give IV fluids initially but careful not to be too aggressive an cause pulmonary oedema. I would give 250ml boluses. If the fluids are not maintaining organ perfusion, give a positive ionotrope (noradrenaline) to help raise cardiac output and perfusion pressures.

Bradycardia: Usually occurs in the first few hours to days after the injury. If haemodynamically significant, give atropine. Rarely is a pacing required.

Back to the case:

You decide to intubate him early prior to the 2hr transfer to the MTC and after giving him 2L of IV fluids and still not passing urine, you start noradrenaline in a subclavian central line. (I think this is becoming a lost art for gaining central access in trauma patients). He starts to pass urine and his MAP is 70. His transfer was uneventful and he was taken to theatre  that day to have a reduction.

In summary, bilateral facet dislocations are unstable and a neurosurgical emergency. My 3 tips:

1) History is important: flexion and rotational injuries can cause facet dislocations.

2) Know the difference between neurogenic and spinal shock. Hypotension is secondary to hypovolaemia in trauma patients until proven otherwise.

3) If injury is at C5 or above strongly consider early intubation.

Hope this has been a useful read!