Hi readers! If you’d ask me about my knowledge of brain injuries, I would have given you a gormless look much similar to Pinky’s one to Brain…. Then I went to a wonderful conference day this week organised by the Kent, Surrey & Sussex Air Ambulance. It was on Brain Injuries (traumatic and medical) and had some eminent speakers, including  Richard Lyon, Mark Wilson, Gareth Davies, Alistair Nicol and Kevin Fong. It was chaired by Dr Malcolm Russell. As the title of this post suggests, I am “Pinky” and all the speakers are collectively “Brain”

KSS Hems is a very special organisation for me for many reasons. Throughout the day I was tweeting some learning points with the #KSSBrain. (Click on the hyperlink to see all the tweets.) 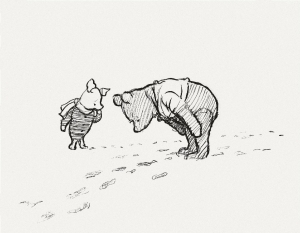 Those who are clever, who have a brain, never understand anything

I thought I’d summarise some of the key learning points from the day so those who couldn’t attend can be enlightened! First up was Richard Lyon (ED Consultant and a KSS HEMS governance lead) talking about KSS’ experience of brain injuries over the past year: In 2014, the service saw 1900 patients, 852 Head injuries (HI), 145 motorbike incidents. 25 of whom died at scene and 58 who had a head injury.

Need to do the basics to a gold standard level of care. Sort out Airway and Breathing. I have seen ambulance technicians at a job, where they have performed a jaw thrust and given oxygen in a head injury patient who improved his GCS to 14 which meant he did not need to be intubated by us. Do the basics, not just well, but to a gold standard.

KSS Hems started carrying freeze dried plasma recently and generally use it as the initial fluid of choice in hypotensive patients. Richard talked about whether there should be other indicators for giving hypertonic saline pre-hospitally apart from blown pupil and cushing’s reflex, as some HI patients not displaying these signs were found to have raised ICP on CT. Where would you go with a HI patient who has a GCS 13- local trauma unit or an MTC? A significant number of GCS 13 patients have a head injury. 1 in 3 have incidence of intracranial pathology.

The distance to an MTC can be vast, however it’s not time to hospital that counts but time to definitive care. I always found triage decision with patients who don’t appear that sick but could be, the most challenging.

Could we use portable USS, using microwaves, to look for brain injuries pre-hosiptally?

Novel techniques inc microwaves for imaging the brain pre hosp could be a game changer in the blood/no blood head inj pt. #KSSBrain

The service is seeing more elderly patients than before and has seen a rise in paediatric HI RSI’s, performing 23 in 2014.

Next we had a patient talk about her experiences of having a significant brain injury. They explained how poor their rehab care was. More needs to be invested in neuro-rehab care in the UK. The military are able to provide 5hrs per day to their patients, where as the guidelines for rehab in NHS Stroke patients is just 45mins per day.

Poignant to have a pt tell us abt there experience of having a brain injury. Remarkable recovery. #KSSBrain #NHS

Ingmar Stroeven (MD for Arai Helemts Europe) explained how the work they are doing is helping to prevent brain injuries in motorcyclists. They use a soft inner shell in their helmets that acts like a car crumple zone on impact. Most helmet impacts are on the front and sides, however not all companies test the sides of the helmets routinely. Malcom Russell did mention the late Dr John Hinds, who introduced him to Arai Helmets. Have a look at John’s awesome talks on the SMACC website. I particularly  found his “motorcycle mayhem” enjoyable!

If you haven't seen @DocJohnHinds talk on motorbike mayhem, watch it! Here's the link http://t.co/EcyRbXnFRP #KSSbrain

Cut the chin straps and get the helmet off ASAP. Some helmets have an emergency release system.

Dr Emyrs Kirkman (Physiologist with the Defence Science and Technology Lab) explained to us about the various animal models used to research brain injuries.

Remember that a blast injury to the thorax will cause a systemic inflammatory response that can spill over into the brain causing oedema.

Dr Thilo Hoelscher (Neurologist and Assoc Prof at Univ of California) gave a fascinating talk on pre-hospital US in Stroke care. He uses US and microbubbles to detect strokes and distinguish between embolic and haemorrhagic strokes.

Microbubbles: "pingpong ball hit w/ US wave it will oscillate & give back a signal different (new/ amplidied)from baseline scan" #KSSBrain

“Sonothrombolysis”: using US to break up a clot. Very precise and no collateral damage. Is it the future of pre-hospital stoke care?

I think we have all been to a HI patient who becomes hypotensive but with no obvious bleeding or tension pneumothorax or cord injury. Why are they hypotensive? A theory is that IBA causes a surge in catecholamines after a head injury causing cardiac abnormalities (hence ECG changes seen in SAH) and initially there is a rise in BP (this rise happens before the ICP has raised). Eventually the hypoxia will lead to a cardiovascular collapse leading to hypotension.

What can we do to prevent this? Treating the hypoxia in the first few mins! How? By signing up to the Good SAM app. and being alerted to someone near you that needs your help. If you haven’t signed up…. Do it today!

Mark Wilson, as ever, gave us a funny and informative talk on traumatic brain injuries (TBIs). Mild, moderate and severe aren’t great ways to classify TBIs. Hypoxia is a bigger problem than hypotension in TBIs. There isn’t one solution that fits all types of TBI’s. Treat the cause of raised ICP and not the number.

Not obstructing Venous Drainage is a key principle in preventing secondary brain injury. Think and treat of extracranial causes of obstructing venous drainage:

Sometimes all you need is…..

Col Alistair Nicol, who works with the Scotland rugby team, talked to us about HI and concussion (or should i say “mild traumatic brain injury (mTBIs)”) in elite sport. See my previous post on it here.

Contrary to what you might think, amateur horse racing is the most dangerous sport when it comes to mTBIs causing 95 mTBIs per 1000 player hours. There is the SCAT  to use as a pitch side evaluation tool. Who comes off immediately?

Child HI: "return to learn before return to play…." #KSSBrain

On penetrating brain injuries, we learnt “not to go fishing for deep shrapnel” and managing infection aggressively is key. But at the end of the day…

So my 3 learning points from the day:

1) In HIs, treat hypoxia aggressively and quickly to a gold standard level of care. Do the basics perfectly. It can be the difference between someone making a good functional recovery and being in a persistent vegetative state.

2) The future of pre-hospital care of brain injury patients, particularly with diagnosis, is exciting with the use of Pre-hospital ultrasound and other diagnostic tools becoming available. “Sonothrombolysis”…. new word for the day!

Hope it was useful!