Intriguing title? I was going to put a picture of the Eurostar but I find Giselle more eye-catching. What’s the tenuous link to working in the ED? Todays post was inspired thanks to a TED talk sent to me by @drjameelkarim by a chap called @rorysutherland. His bio can be found here, but essentially he is a brilliant thinker and has some interesting ideas on behavioural economics (studying how psychological factors influence individuals economic decisions).

He uses an example of how engineers were asked how they would make the train journey from London to Paris better. As they were engineers they came up with an engineering solution.

“Spend £6 billion on new railway tracks from London to the coast to knock 40 mins of a 3 and half hour journey.”

Rory goes on to say for a fraction of £6 billion, they could have installed wifi on the train to enhance customer experience.

“For 10% of the cost what you should in fact do is employ all of the world’s top male and female supermodels, pay them to walk the length of the train, handing out free Chateau Petrus for the entire duration of the journey. You would still have money left over and people would ask for the journey to be slowed down!”

*penny begins to drop* How could we improve patient experience in the NHS for a fraction of the cost that is currently spent trying to do this. I’m not saying for  our ED’s and hospitals to be filled with supermodels and fine wine, (well not out loud!) but the devil is in the detail.

I am not saying that spending lots of money to change things is wrong. It clearly does help  but are there are small, low cost things that we can do from the managerial “bottom up” to enhance patient experience? Quite rightly, patient experience is part of most hospital trust’s values and we should be looking to improve it. 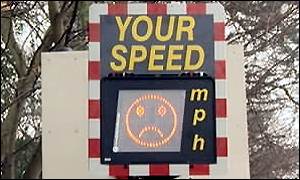 Rory also mentions that perception is often better that compulsion. The tendency of organisations, institutions and government is to use compulsion to drive change. People, on the other hand, often respond  better to being influenced and persuaded. He uses the following example:

“These funny signs that flash your speed at you, some of the new ones actually show a smiley face or a frowny face, to act as an emotional trigger. What’s fascinating about these signs is they cost about 10 percent of the running cost of a conventional speed camera,but they prevent twice as many accidents. So, the bizarre thing, which is baffling to conventional, classically trained economists, is that a weird little smiley face has a better effect on changing your behavior than the threat of a £60 fine and three penalty points.”

I’m sure you can think of changes you could make to your workplace that persuade rather then compel people to change….

Have a look at his graph: 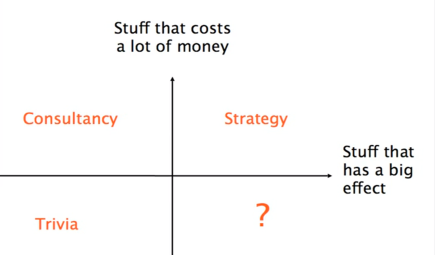 In the NHS, strategy is important, but up to a point.  Rory says that people think that the more you spend on  healthcare the better your healthcare is. Not true. Doctors will come up with medical solutions on how the NHS can be improved just as managers will come up with managerial solutions. Look at the US system. Overmedicating and over investigating by doctors is a side- effect of how much money is spent on healthcare. Doctors will have a natural bias for intervention if there is a choice of doing something or doing nothing.

“People always prefer something. The doctor’s recommendation of “Actually, I’d just leave it. It’ll probably go away,” is never one with which people are comfortable.”

Antibiotics for sore throats anyone? But it also happens closer to home.  I have seen patients  getting different investigations for the same complaint if they attended a smaller ED compared with attending  a bigger, all singing and dancing teaching hospital ED (perhaps as a result of centralising care of things like trauma, heart attacks and strokes and having 24hr availability of resources, both imaging and specialists). Now, you may say that it is a good thing to have everything done in one go, but does the patient really need that test to be done there and then? But at what cost (with respect to balancing finance, performance and quality of care) especially in the current times of austerity?

“Consultancy” and “trivia” are self explanatory. The “?” part of the graph is what I’m interested in. These are things that do not cost a lot of money but produce things that may or may not work. However…

“ if they do work, can have a success absolutely out of proportion to their expense, their efforts and the disruption they cause.”

Rory calls it a “Chief Details Officer”. “The people who actually have no money,who have no extravagant budget, but who realize that actually you might achieve greater success in uptake of a government program by actually doubling the level of benefits you pay, but you’ll probably achieve exactly that same effect simply by redesigning the form and writing it in comprehensible English.”

I actually think that all of us on the “shop floor” of the NHS/ED are “chief details officers”. We all have ideas that probably don’t cost a huge amount of money but may produce a significant change. I think all the cuts and costs to save money have been squeezed out of us resulting in efficiencies being harder to deliver. At some point, further cuts will break staff morale and hence reduce their performance if it hasn’t already happened where you work. 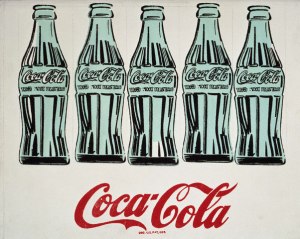 “What’s great about this country is that America started the tradition where the richest consumers buy essentially the same things as the poorest. You can be watching TV and see Coca-Cola, and you know that the President drinks Coke, Liz Taylor drinks Coke, and just think, you can drink Coke, too.  All the Cokes are the same and all the Cokes are good. Liz Taylor knows it, the President knows it, the bum on the street knows it, and you know it.”

The NHS, but more specifically the Emergency Department, is our  Coca-Cola….it is the same for whoever uses it. The Prime Minister knows it , Jeremy Hunt knows it, the homeless man on the street knows it and you know it.

You know what, I would love to be on the train from London to Paris with Giselle  walking up and down serving me drinks but instead of chateau petrus I’d equally be happy with a coke….

Hope its provoked some thoughts but more importantly been a good read!

One thought on “The Eurostar, Giselle & a bottle of Chateau Petrus…. A new vision for the NHS”